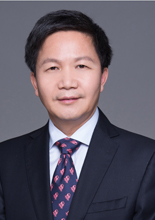 Vice President – Chen Xinyuan: Born in 1964 . Member of the Communist Party of China, Doctor of Economics, professor of accounting, distinguished professor of the Chiangjiang Scholars Program by the Ministry of Education, and doctoral supervisor at SUFE. Current Standing Committee member and vice president of SUFE. Editorial board member for journals, such as the China Accounting and Finance Review, and the Journal of Management Sciences in China; council member of the Accounting Society of China; executive director and secretary general of the education branch of the Accounting Society of China; secretary general and member of the Education Advisory Board for Accounting under the Ministry of Education; deputy director of the National Graduate Education Advisory Board for Accounting.

Studied at the Hangzhou College of Commerce from September 1981 to July 1985, where he received a bachelor's degree in economics (accounting). He then studied at the Department of Accounting, Shanghai University of Finance and Economics, from September 1985 to February 1988, where he received a master's degree in economics (accounting). He received a teaching post at the Department of Accounting of the university in March 1988, commenced doctorate studies while teaching in March 1989, and received a doctorate of economics (accounting) in June 1994. He was promoted to associate professor in July 1994 and to professor in June 1996. He served various posts, such as deputy director of the Department of Accounting at SUFE; assistant director and dean of the College of Accounting; and dean of the Institute of Accounting and Finance at the Ministry of Education's Key Research Base of Humanities and Social Sciences; and assistant principle. He was appointed as a Standing Committee member and vice president of SUFE in December 2014. Main research interests include financial accounting and corporate governance. He is Chief Editor of textbooks, such as Accounting, Accounting and Financial Issues in Transition Economy, and Advanced Financial Accounting. He has published more than 30 articles in academic journals, including the Economic Research Journal, Management World, and Accounting Research. He presided over the completion of 6 national academic projects, and was awarded 4 second prizes for National Outstanding Achievements for Teaching, and 3 prizes for Outstanding Achievement for Scientific Research issued by the Ministry of Education and Shanghai Municipality. He was also awarded the honorary title of Outstanding College Lecturer by the Ministry of Education, the National May 1 Labor Medal, and Model Worker by Shanghai Municipal Government, and has been selected as a candidate in the "New Century National Hundred, Thousand and Ten Thousand Talent Project".