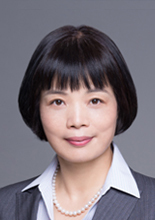 Born in 1966 . Member of the Communist Party of China, Doctor of Economics, professor of real estate economics, and doctoral supervisor at SUFE. Current Standing Committee member and vice president of SUFE; expert member of the Master's Education Advisory Board for Engineering Management under the Academic Degrees Committee of the State Council; and member of the Education Advisory Board for Real Estate Development and Management in Higher Education Institutions under the Ministry of Housing and Urban-rural Development.

Studied at the Department of Investment, Zhongnan University of Finance and Economics, from September 1982 to July 1986, where she received a bachelor's degree in economics. She then studied at the Department of Finance, Shanghai University of Finance and Economics, from September 1986 to January 1989, where she received a master's degree in economics. She received a teaching post at the university in February 1989, and became a visiting scholar at the Department of Economics, University of Bremen, Germany, from October 1996 to October 1997. She also commenced doctorate studies, receiving a doctorate in economics in November 2000. She was promoted to associate professor in June 1999, to professor in June 2004, and was appointed as doctoral supervisor in real estate economics in December the same year. She served various positions at Shanghai University of Finance and Economics, including vice president of the School of Public Economics and Administration; vice president and dean of the International Cultural Exchange School; secretary of the Party branch; and assistant principle and director of Academic Affairs, director of the Admissions Office, and director of the Teacher and Teaching Development Center. She was appointed as a Standing Committee member and vice president of SUFE in December 2014. Main research interests include theory and policy of real estate economics, theory and policy of housing security, and engineering management. She has published more than 50 articles in various academic journals, and has presided over the completion of a number of provincial-level projects, including projects from Humanities and Social Sciences of the Ministry of Education, and decision-making consultation projects in Shanghai. She was awarded the March 8th Red-banner Pacesetter of Shanghai, the Baosteel Outstanding Teacher Award, and the Research Achievement Award in Decision-making Consultation of Shanghai Municipality. She has also been selected to take part in the Dawn Program of Shanghai Education Commission.